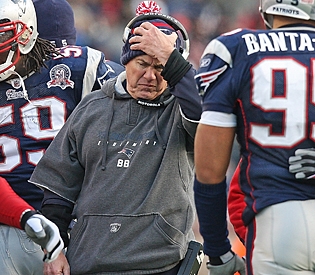 I want to begin this article by making it clear that I am one of the most diehard and loyal Patriots fans out there.  However, as I sit back and watch what has been going on with the team over the past several years and throughout this offseason, I have to seriously question the direction they are heading in.  Many fans, including myself at times, still see the Pats as a well oiled machine that hasn’t outlived its days as a dynasty.  The reality is they haven’t won anything in six years, the icing on the cake being getting blown out by the Ravens in the playoffs last year.  Their frugality and unwillingness to spend money to improve the quality of the team has finally caught up with them, as many publications now have the Pats finishing 3rd in the AFC East behind the Jets and Dolphins.  What was once considered to be one of the best run franchises in all of sports may now be stumbling back into mediocrity.  How did this happen?

Over the past 10 years the Patriots have become known for their expertise in talent evaluation, finding value at every position and having strong influences and leadership in the locker room from both players and coaches.  There’s no question a winning coach is still in place, but how good has the talent evaluation been over the past several years?  Sure they have made excellent trades for Randy Moss and Wes Welker barely giving up anything in return, but a franchise that historically has been one of the best in the draft has fallen behind – which may be attributed the loss of GM Scott Pioli.  Year after year, they have traded back or out of the first round altogether, which has terribly frustrated fans.  Beginning in 2005, the Patriots first round, 32nd overall pick was Logan Mankins who has turned into one of the best guards in the game and who they now refuse to pay.  2006 may have been the worst draft year where the most dependable pick was kicker Stephen Gostkowski who was taken in the 4th round.  Their first round pick that year was underachieving and injury plagued Laurence Maroney, followed by receiver Chad Jackson who they traded up to get and who turned into a complete bust.  2007 was another horrible draft where the only notable player they got was Brandon Meriweather, who has turned into a pretty decent safety although he still makes absolutely ridiculous decisions at times, ie. taunting penalties to put teams in scoring position.  2008 seemed promising with the drafting of Jerod Mayo at 10 overall (who they traded down to get). After a monster rookie season, Mayo suffered a sophomore slump, albeit primarily due to injury.  In that draft they scored studs like Terrence Wheatley, Shawn Crable, Kevin O’Connell, Jonathan Wilhite and Matthew Slater.  And by studs I mean absolute busts.  It may be too early to tell what the class of 2009 will achieve but Ron Brace doesn’t seem to show too much promise and Darius Butler and Pat Chung have yet to offer serious contributions.  However, it must be noted that they did take Sebastian Vollmer in the 2nd and Julian Edelman in the 7th, both of whom were nice surprises.  Also note that they did trade out of the 1st round entirely.  That brings us to the 2010 draft where they traded down multiple times passing up impact players to go with a guy like Devin McCourty to throw into their heap of undersized cornerbacks.  They also drafted highly touted tight ends Rob Gronkowski and Aaron Hernandez and while I like them, we all know the Patriots’ record with drafting tight ends (see Ben “stone hands” Watson and Daniel Graham.)

With the past five years of draft history outlined it is pretty clear that the Pats have not yet drafted a serious impact player, save perhaps Jerod Mayo, and at times Meriweather.  Of those two, Mayo was able to step in and contribute right away but it took Meriweather several years to develop into a starter.  Players are first round picks for a reason – because generally they are better and are able to contribute more quickly.  How can you expect to improve your team if you keep trading down and out of the first round for “value” in later rounds?  When a team says it is looking for value in later rounds it basically means they are looking to get lucky and hit the jackpot with some unknown player, which is perfectly fine if you are a small market team and need to run your team that way.  The fact of the matter is the Patriots are not a small market team.  Actually, Forbes just recently published a list of the richest sports franchises in the world. Guess who was sitting there at number five?  You guessed it.  The stingy, value-seeking New England Patriots. That’s not number five in the United States or in the four major sports, that’s in the world.  To put it in perspective number one was Manchester United and number three was the Yankees.  As a matter of fact, all 32 NFL teams were on that list.  That’s right, all 32 NFL teams were on the list of the 50 richest sports franchises in the world.  That means that even the bottom feeding Oakland Raiders (44th), perhaps the most pathetic franchise in all of American sports, made the list ahead of great franchises like the Lakers (49th).  The scariest part is where the Pats fall in the payroll rankings.  For the 2010 season the Patriots have the third lowest team salary in the NFL at a projected $92,734,120.

That is why I get so upset when I hear the Patriots can’t afford certain players or refuse to offer contracts to guys who have played their hearts out for them.  Vince Wilfork was put through the ringer after not holding out, not making a stink about his contract situation, and showing up for camps, which is more than can be said for most players.  Tom Brady is still without a new contract.  They refused to sign pro bowler Asante Samuel because he was demanding too much.  Instead they went with cornerback by committee and put on the most pathetic display of pass defense I have seen in a while.  They inexplicably traded Mike Vrabel to free up space from his miniscule couple million dollar contract.  The one big name they did sign was Adalius Thomas which worked out terribly.  Not to mention the Joey Galloway and Shawn Springs experiments.  They simply refuse to go out and sign big name players or to keep their high first round picks because they don’t want to pay people.  That doesn’t sound like something the 5th richest sports franchise in the world should be doing.

I’m not a proponent of players making exorbitant amounts of money, especially rookies who haven’t proven themselves yet.  I do believe however, that when a player is loyal, works hard and performs, then he should be compensated accordingly.  The Patriots refuse to do that and they have gotten that reputation throughout the league.  What kind of star player will willingly choose to come here now if he knows he’s going to be treated like that?  They are alienating their own players and future prospects, and that needs to change.  As a fan it’s easy for me to say that a club should open their pockets and spend away – I do realize that however wealthy a team may be they do still need to operate under a budget.  However, it’s evident that the Patriots are not operating to their maximum spending potential.  They haven’t spent money in the draft or in free agency and it’s beginning to show.  The Jets went out and got Santonio Holmes, Antonio Cromartie,  LaDainian Tomlinson, Jason Taylor, and stayed put in the draft.  The Dolphins signed Brandon Marshall, Karlos Dansby, and stayed put at their position in the draft.  Outside of keeping Vince Wilfork, the Pats have made no major moves and moved down multiple times in the draft.  They signed dinosaurs like Tory Holt and Alge Crumpler.  Sweet.  Way to keep pace in the East.  Not to be repetitive, New England Patriots, but you are the 5th richest sports franchise in the entire world.  Act accordingly.