If Pujols and A-Rod Were Paid on Commission 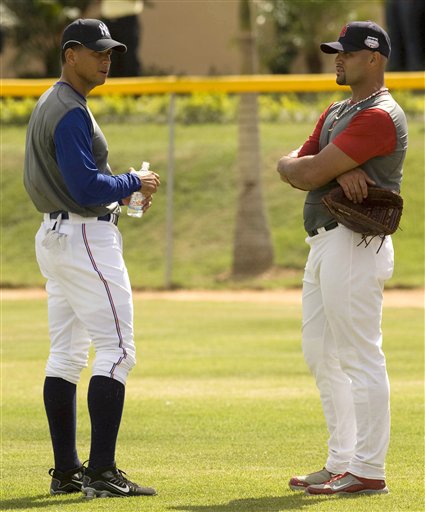 This time of year sucks. Football is over, baseball hasn’t started, the NBA is at the midseason point and March Madness has yet to begin (sigh). That said, I naturally find my thoughts turning to the upcoming baseball season this time of year, and I came across one hell of stat.

Albert Pujols was in the process of negotiating a contract extension with the St. Louis Cardinals, a process which has come to a halt until the end of the season when he’ll either resign with the Cardinals or become a free agent. The Cardinals supposedly offered him a deal that would make him between the 6th and 10th highest paid player in baseball — not to shabby, but not a deal worthy of the best player in the game. So think for a minute — what if these superstar athletes were paid based on their actual on-field performance, a la a waiter or a salesperson?

Absolute craziness, and further evidence that athletes are overpaid (especially A-Rod). Think about it. You stroll up to the plate with a runner on third, maybe half hungover, and slap a single up the middle. Cha-chingggggg — $204k in the bank. My god.

One final note while I’m ranting on the baseball front. I’d like to send a shout out to a former Yankee (yes, you heard me correctly). Hideki Matsui. This guy delivered the Yankees their last World Series title on a silver platter, never once complained about his role, and had countless other big-game hits for the Yankees. Yet he gets little or no credit — you never heard any buzz about Matsui in New York. Sure, he’s foreign, older, quiet, reserved, and generally not tabloid material. But if someone like Nick Swisher ever contributed half as much to the Yankees as Matsui did, he’d have the entire city of New York eating out of his palm. You know I’m right. Just sayin’.

Cameron Cameron Cameron. What have you done? You’re dating Alex Rodriguez? And doing things like paddle boarding and feeding him popcorn at the Super Bowl? All of the good feelings I used to have about you just flew out the window. Justin Timberlake to A-Rod. Seriously? Talk about a fall from grace. I’m ashamed of you.

When I first started writing this blog, one of the first ideas that came to me was writing an offensive comparison of David Ortiz versus Alex Rodriguez. That post, which showed Ortiz’s versus A-Rod’s stats since 2004, struck a chord with Red Sox and Yankees fans alike. The numbers pretty much were a push, and I argued that given Ortiz’s postseason prowess, he should be declared the better offensive threat during that period. Yankees fans, unable to listen to reason, fought back. “We’ll see how Ortiz does once he’s off of steroids, I bet he’ll suck,” was the general sentiment. And Yankees fans chuckled after Ortiz had an absolutely abysmal start to the 2010 season. I could hear the “I told you so’s” echoing in my ears. Be patient, I told them. And here we have both Ortiz’s and A-Rod’s stats for 2010. The number of at bats they each had was nearly identical.

Those numbers, once again, look frightening similar to me. Now I will certainly give A-Rod the edge, as 23 RBI’s is a significant difference. But you do have to factor in that A-Rod had people on base in front of him much more often than Papi did. Papi consistently had Marco Scutaro and a rotation of other scrubs hitting in front of him. That’s not an excuse, it’s a reality. Regardless, these two had very similar seasons at the plate. Ortiz was just fine “without his steroids.” Ironically, there is no more proof of Ortiz using steroids than there is of anyone who was making these statements using steroids, but that’s another issue and a bridge we’ve crossed all too often. Here’s an updated look at Ortiz and A-Rod’s stats, since 2004.

Take it for what it is — Alex Rodriguez averages 1.1 more home runs and 1.4 RBI’s more than David Ortiz per season. Whose ears are echoing with “I told you so” now?

Alex Rodriguez hit his 600th* home run today, furthering his spoiling of all that is sacred in terms of career home run numbers. Let’s make one thing very clear — Hank Aaron, Babe Ruth, Willie Mays, and Ken Griffey Jr. are the only players truly in the 600 home run club. Remember the electricity you feel when you watch video of Aaron breaking Babe Ruth’s record? It’s sad to know that same feeling won’t emanate if A-Roid one day hits his 763rd home run. He stole that moment from baseball. He is a disgrace to the game.